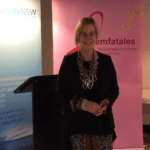 On Wednesday 9th March, at the ACON Café in Surry Hills positive women were recognised for their struggle for visibility within the HIV community in  Australia. As the key speaker, Jane Costello, emphasised the specific concerns of women living with HIV.  The Women’s Morning Tea afforded the opportunity for positive women to voice concerns particular to women with HIV, without being overshadowed by other groups within the HIV community.  Costello was able to speak to the fact that women with HIV make up 50% of the global total of people living with HIV. Furthermore, although women are not seen as a priority population within Australia, they make up 10% of people living with HIV in Australia and have specific gender based concerns. Most women acquire HIV through heterosexual sex and 19% of people diagnosed with HIV in Australia reported transmission via heterosexual sex in 2014. Costello also called for a more vigilant protocol for HIV testing of women to avoid characteristic late diagnosis of women in Australia.

The print version of the new website “Living Well: Women with HIV” was also launched at the Women’s Morning Tea. Living Well is a fantastic resource by AFAO and NAPWHA that offers a range of information specifically tailored for women living with HIV. The website and print version includes information on having sex, having children, keeping well and getting support. Many HIV positive women lead by Femfatales had input into the development of this website. Check it out yourself at: http://www.womenlivingwell.org.au/