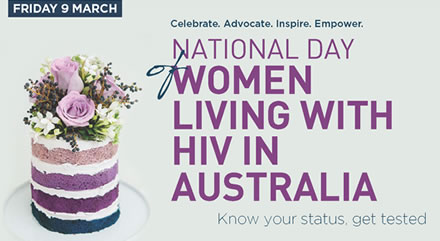 “Good afternoon.
Before I start, I would like to acknowledge the traditional owners of this land, the Gadigal people of the Eora nation, and pay my respects to Aboriginal elders past and present, and any Aboriginal people here today.

My name is Jean-Marie and I work at Pozhet, the NSW statewide service working with heterosexual people living with and at risk of HIV.

This, National Day of Women living with HIV follows yesterday’s International Women’s celebration, which told us to “Leave no woman behind”. This fits perfectly, with today’s topic, which is “know your status – get tested”.

Whilst overall, Australia is doing relatively well in its HIV response, it is not the case for everyone including women, particularly those from Aboriginal and Torres Strait Islander, and culturally linguistically diverse backgrounds.

In Australia, women have consistently accounted for about 10% of people diagnosed each year. Most of these women get HIV through heterosexual sex. There are women in general community who may be at risk of HIV and are often unaware about the risks and realities of it. Women, who come from countries where, HIV prevalence is high, often talk about how, they now feel safe, because they are in Australia, as they believe HIV does not exist here.

Many women are diagnosed when they are unwell, or their partner tested positive to HIV. Many are not diagnosed, until, they have presented with symptoms, to doctors many times after. This is definitely not an ideal situation, as women’s health often suffers, significantly in a long run as consequence of late diagnosis.

Testing, as well as prevention messages, often do not reach women, as they do not see that HIV is relevant to them. That is why; women need to be involved in the conversations, and processes, so that more, effective messaging and strategies, can be implemented. For example, women and their partners travelling to countries where HIV prevalence is high, need to take precautions.

Depending on the risk behaviour, women should be offered routine HIV testing, not only at all sexual and reproductive services, but also, at general practices. In fact, it is very important that general health care and education to include HIV information for women of all ages, and backgrounds. General Practitioners play significant roles in this, and we need to make sure they are aware of women’s, risk and updated with the latest information. For example, offering PrEP as a prevention strategy to protect women at high risk of HIV.

The existence of HIV stigma and discrimination in general community continues to be ‘the’ barrier, to testing as people fear what will happen if they tested positive, particularly in CALD and heterosexual communities, where people living with HIV are very isolated, both socially and geographically. Therefore, it is essential that, we continue our effort to break down those walls, so that we can have a friendly and safe environment, where HIV related topics and issues can be discussed.

We will also need to talk about inequality and violence towards women, which often have created additional challenges and barriers to our HIV prevention efforts. Women are more vulnerable under those circumstances. Hence, encouraging women to voice their concerns, participate in decision-making processes, and take control of their own bodies, and wellbeing will empower women to support each other, and create a non-violent environment for everyone to enjoy.

Australia is committed to virtually eliminate HIV transmission by 2020. We cannot achieve this goal without women’s involvement. Let’s keep this conversation about HIV alive, not just today, and encourage more women to test for HIV.

We have to make sure ‘no one including women is left behind’.