The Pozhet Retreat aims to improve the health outcomes and support networks for heterosexual people living with HIV and their partners by providing an opportunity to form connections with peers and with service providers.

This year it was held on the weekend of the 25-27 October in Berry. 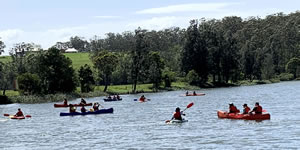 We had 40 applications to the Pozhet retreat and 23 people actually participated. It was a diverse group with nine of the 23 participants completely new to Pozhet and eleven from CALD backgrounds. Seven were from regional areas, including Illawarra and northern NSW. Two sero- discordant couples and one sero-concordant couple (recently diagnosed) also attended. One couple attended with their young child.

Thanks to all the services who referred people to the retreat. Half of the referrals came from social workers and counsellors so keep the good work up! Two social workers attended; Leo from HOT and Danny from Poscentral and two staff from the SLHD HARP team represented Pozhet – Susan and John.

A great weekend was had by all and participants provided positive and thoughtful feedback. Comments can be accessed on the new Pozhet website: pozhet.org.au

Thanks to the South Eastern Sydney HARP team for partnering with Pozhet for the Berry retreat.

The dates and venue for the 2020 retreat will be on the Pozhet website as soon as they are locked in. 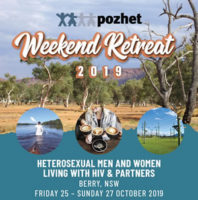