The Pozhet social media campaigns commenced in October 2018 and will run until June 2019. Each campaign will have specific messages and target audience with a social media toolkit assisting organisations to use our materials on their own social media channels.

The first Facebook campaign ran in October 2018 and focused on people travelling overseas. It consisted of two videos – key message for departure video: pack condoms and key message on return video: get a HIV test. It was a great success and reached more than 157,000 people. 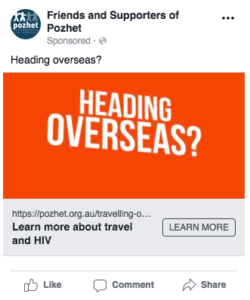 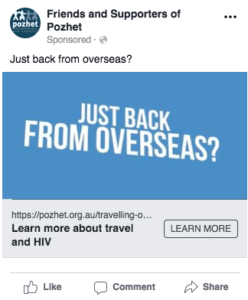 For the second campaign, Pozhet partnered with the Multicultural HIV and Hepatitis Service to focus on culturally and linguistically diverse (CALD) communities. The message is about HIV testing being easy, private and safe, and get a HIV test today. This campaign is translated into 6 key languages: Thai, Vietnamese, Portuguese, Simplified Chinese, Indonesian and Spanish and will be launched during HIV/AIDS Awareness Week.

If you would like to know more or want information about social media campaign toolkits and future campaigns please contact pozhet@pozhet.org,au.