This year some Pozhet staff attended the Australasian HIV & AIDS Conference in Canberra. The Conference Plenary included a moving Welcome to Country by Wally Bell. Attendees were then welcomed by the Australian Federation of AIDS Organisations (AFAO), Australasian Society for HIV, Viral Hepatitis and Sexual Health Medicine (ASHM) and National Association of People with HIV Australia (NAPWHA) and the session ended with a tribute to one of Australia’s leading HIV advocates, Levinia Crooks.

AFAO held a Community Hub in the Exhibition Hall which held sessions in the tea and lunch breaks. Sessions included discussions about community engagement, HIV prevention and sex workers and disparities in prevention, testing and care in prisons and on the final day a session on Hidden populations and the virtual elimination of HIV transmission. These sessions were well attended with the audience encouraged to contribute.

The NSW Ministry of Health and Kirby Institute held a session on Tuesday: On our Way to ending HIV in NSW. Is this the end or the beginning? It was noted that although rates of HIV had decreased for men who have sex with men, rates in the heterosexual and CALD communities had not.
For more information on the NSW data: http://www.health.nsw.gov.au/endinghiv/Pages/tools-and-data.aspx

The Kirby Institute released the Australian Annual Surveillance Report for HIV and Blood borne Viruses on Tuesday morning. Of particular interest to Pozhet was the data which talked about:
• an increase in testing among gay and bisexual men but gaps in testing, particularly in CALD and heterosexual populations.
• The groups who continue to be diagnosed late are people from CALD backgrounds and heterosexual men and women.

Heterosexual transmissions continue to make up about 1 in 5 diagnoses (21% in 2016). Nearly half of heterosexual people diagnosed with HIV were diagnosed late, meaning they were likely to have acquired HIV at least four years before diagnosis.

Harm reduction and prevention strategies to minimise HIV transmission among people who inject drugs and female sex workers have been highly successful. Australia also has extremely low rates of HIV transmission from mother to newborn due to testing and treatment programs.

The picture below was accessed from https://data.kirby.unsw.edu.au/hiv 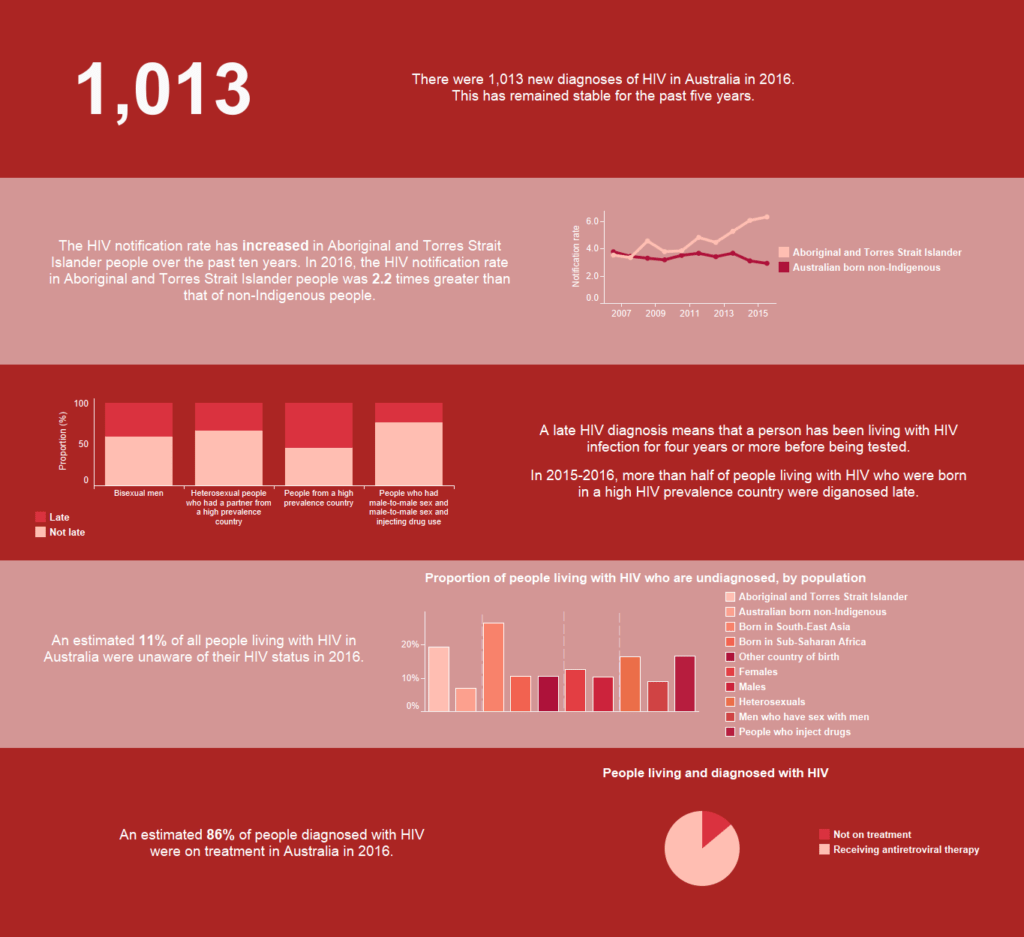